For the first time, an Afghan woman athlete, Somai Ghulami has won a gold medal at the South Asian Games held this year.

Here at Hamid Karzay international airport in Kabul, hundreds of supporters have gathered to welcome Somai Ghulami and other star athletes home.

The team is returning from the 12th South Asian Games, held in Guwahati and Shillong, in India.

Somai Ghulami won a gold medal in taekwondo at the games, but she never imagined she would receive such strong support from the public.

“I am very happy,” says Ghulami, “I really am proud that I could bring this medal to my country. When I won the match I can’t tell you how happy I was. I started to cry I was so happy.”

Somai has been training hard for the games and was dreaming of bringing a gold medal home.

The win, she says, is not just for her, but all Afhgan women.

“I want to bring pride and happiness to my country,” she says, “With my win I want to support, inside and outside the country, the rights of Afghan women, which have been suffering for years.

Afghanistan won seven gold, nine silver and 19 bronze medals at the South Asian Games this year, a total of 35 medals.

Placing the country in fourth position.

Roobina Jalali, a spokeswoman for Afghanistan Olympic Federation, says they were very impressed with the country’s results.

“We are really happy that this time Afghan athletes won more medals,” says Jalali, “You see how many people are here at the airport to encourage and support their teams, which shows public enthusiasm for sport. Actually these medals that have been brought by our champions belong to the entire Afghan nation.”

Somai Ghulami had three taekwondo matches at the games and won each one.

Her first match was against a woman from Bhutan. It was a tough contest but Sumai says she drew inspiration from knowing her family and friends back home were watching.

Somai’s father Ghulam Yahya was also at the airport to welcome her home.

“I really feel happy and so proud my daughter has won a gold medal,” he says, “I have always encouraged and supported my daughter. I am her father but I always deal with her as a friend, a brother or a sister.”

Somai says her family never stopped her doing from anything because she is a woman.

But that is not the same for other women in Afghanistan’s conservative society.

It is still relatively new for women here to compete in sporting events.

But Somai Ghulami says you have to fight for what you believe in.

“Here the society is traditional and conservative, families don’t let their girls and women work or be active outside the house, especially doing sport is a challenge,” she says, “But I ask all Afghan women to push for their rights. If they really want to do something they can change their family’s views and also society’s. They must show than Afghan women can also bring pride to the nation.”

In the past year more and more Afghan women are playing sport, with other teams such as the national women’s soccer team also bringing home medals.

Women’s activists see the achievements in sport as a huge step for Afghan women, one that will encourage more women in the country to fight for their rights. 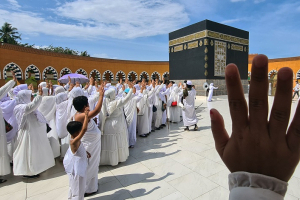